Countering the Lies About Religious Freedom in Newport

Across the United States, around noon on Friday June 8th, rallies were held in over 160 cities to oppose President Obama's HHS mandate requiring all employers to "provide free contraceptives, sterilization and abortion-inducing drugs through their health plans." Given that reproductive rights are central to any kind of real health care plan, opposition to such a scheme can only be coming from the hard line anti-abortion religious right. And a quick look at the "blogroll" on the national organization's website quickly confirms this.

In Rhode Island, the event took place in Eisenhower Park in Newport. Organized by Suzanne Kane, the youth pastor of the Lifepath Church of Middletown, RI, the local rally had four adult and two high school aged speakers and lasted about an hour. You can read an interview with Suzanne Kane at CautionChurchAhead.com about her motivations for holding the rally and some of the details about how she organized it. I tried to be very fair in my interview and gave her plenty of opportunity to express her opinion.

Ten members of the Humanists of Rhode Island showed up to counter protest the rally. We did so with some trepidation, because in interviewing Suzanne Kane, I was informed that the organizers of this event with primarily teens from LPY4life (Lifepath Youth for Life), a youth run pro-life ministry, and I had no desire to protest a youth run and youth attended event. Still, I was not completely convinced by Suzanne's explanation, because she seemed very involved with organizing the rally, and indeed, hen I got there, my suspicions were confirmed. Only two students spoke, no more than five or six students were present, and Suzanne Kane was in charge of the rally and the vast majority of the 85 or so people who showed up to hear the speakers were over the age of fifty. 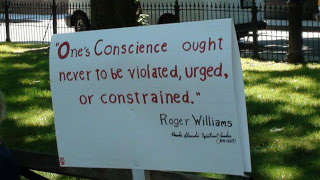 When our group showed up (five of us drove down from the Providence area and five of us were more local) we were immediately confronted by Suzanne, who asked if we were there to protest the event. I informed her that we were, but that e intended to be very polite, we had no interest in disrupting her rally. We were there to hand out informational fliers and to observe and video the proceedings. She claimed that her permit for the park gave her exclusive use of the park and that we had no right to hold up signs or to speak out during their speeches. This was a curious thing for Suzanne to have said, because in my interview with her I asked:

How many people do you expect to attend this rally, and was any special permitting required by the City of Newport?

We should expect about 200 people and did not have to have a special permit.

Okay, so maybe she got a regular old permit, not a special one, but my understanding was that no permit was needed, asked for or procured by the rally organizers.

So I set up my camera and stood quietly recording the show while the other members of the group handed out fliers to passers by explaining what REAL religious freedom is. What the controversy over the HHS mandate boils down to is that Catholics, Evangelicals and others across the country want to be able to opt out of the health care system because they are opposed to birth control in all its forms, up to and including abortion. They see freedom of religion and conscience as the freedom to dictate to the government what kind of laws they should and should not pass. This is not freedom, this is theocracy.

Freedom of religion means completely separating church and state, or to paraphrase Jesus, "render unto Caesar what is Caesar's and render unto God what is God's." Those speaking at this rally have no real understanding of the importance of this principle, or about the solid legal precedents that have established this principle as one of the bedrocks of our nation.

Later, at about 24 minutes,  speaker named Cathy talks about microchips being forcibly injected to every human o hat the government can keep track of them. And the science is only two week away This idea is expressed without irony, but with extreme paranoia. At 35 minutes, Cathy's mother runs up and starts chastising the people who did not attend the rally, for not showing up. That's right: She was yelling at people who were not there.

Filled with lies, hate, fear and bigotry, the Rally for Religious Freedom exemplified Orwellian Newspeak at its worst. The United States does not need this kind of reactionary political pandering, and when it occurs, it should be opposed, politely and with actual facts.

Posted by Steve Ahlquist at 1:48 PM