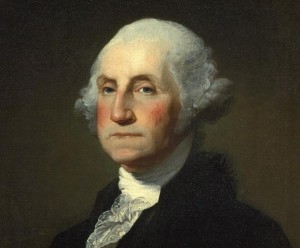 It sounds like the start of a bad joke: a Rabbi, an Imam, and an atheist walk into a Synagogue...

In this case, though, it is the story of a ceremony at Touro Synagogue in Newport - the 65th annual reading of George Washington’s Letter to the Hebrew Congregation. It was a celebration of Washington’s poignant 1790 letter eloquently stating to Newport’s Jewish community (what was left of it after the British occupation of Newport during the Revolution) that the new country would be committed to religious freedom, to being a nation where the government offers “to bigotry no sanction, to persecution no assistance.” To a Jewish community used to being driven violently from country to country (including from England in the 1200's, to be welcomed back somewhat reluctantly generations later,) these words meant that the religious tolerance they had found in colonial Rhode Island would continue in the new United States.

The invocation at Sunday’s reading of the historic letter, given by the Imam of a Providence Muslim community, and the benediction given by Touro Synagogue’s Rabbi, remind of us the breadth of this commitment: that the U. S. would be a country welcoming of Jews and Muslims (“Turks” in Colonial era parlance) as well Christians.

As was noted in the introduction of Jessica Ahlquist, the young atheist who successfully fought for the removal of a prayer banner from Cranston West High School, religious tolerance in Rhode Island applied not only to non-Christians but also to those who did not believe. And there were non-Church goers, and likely non-believers, in Colonial Newport along with Protestants, Jews, the occasional visiting “Turk," and eventually Catholics.

Jessica was there to receive the Judge George Alexander Teitz Award, a non-monetary award from the non-sectarian Touro Synagogue Foundation that is given annually to “an individual or institution that best exemplifies the contemporary commitment to the ideals of religious and ethnic tolerance and freedom, expressed in President George Washington's 1790 Letter.” Jessica joins the likes of the first recipient of the Teitz award, Senator Claiborne Pell.

She was introduced by Judge Teitz’ son, Andy, who reminded the audience of the threats and antagonism Jessica faced in Cranston for standing up for the Constitution and Separation of Church and State. In accepting the award, Jessica made perhaps the most meaningful statement of the afternoon’s proceedings. In talking about her experience with the Cranston school prayer banner, she said, in reference to this event at Touro, "This is what I wanted to happen, this is what I was fighting for when I did this..."

To see Jessica honored by a community that, while largely holding on to its belief in a supernatural “higher being” also sees the importance of Church-State separation, was a moving experience.
Note: The Providence Journal covered this event with a small selection of photos, completely ignoring the fact that Jessica was honored with a prestigious award at this ceremony. As Chuck told me in correspondence:

[Not mentioning Jessica receiving the award] sounds like a deliberate slight. Though there were certainly other things to write about -- the Imam giving the invocation, Sen. Reed's speech -- the award to Jessica was a significant part of the event. Should have been included. That's really poor journalism.

Posted by Steve Ahlquist at 9:38 PM