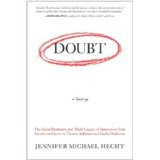 The Humanist Book Club selection for September was Doubt: A History: The Great Doubters and Their Legacy of Innovation from Socrates and Jesus to Thomas Jefferson and Emily Dickinson by Jennifer Hecht. To say that the author's depth and breadth of knowledge is impressive is an understatement.

The main thesis seems to be that the nature of doubt reflects the nature of belief and vice versa. According to Hecht, compulsory faith was not a part of religion until the emergence of skepticism and secularism. Belief yields to rationalism when doubters crave knowledge. When cosmopolitan life exposes believers to rival faiths, orthodoxy yields to tolerance but leaves doubters craving meaning.

By way of summary, I've isolated 13 recurring themes that I found in the book and linked each with an aspect of doubt with which it is associated. You will note an attention to temporal as well as geographic diversity. There are defunct philosophies (Cynicism and Stoicism) whose influences are still felt, modern movements (Humanism and Antitheism) influenced by doubters from an earlier time and approaches that have endured (Naturalism and Empiricism) and evolved.

The quotes below are drawn from a variety of sources, as Hecht often paraphrases. They are provided to demonstrate the historical and geographic continuity of doubt.  The summary is compact out of necessity, but I found it useful to enumerate the (13) threads that I could extract from Hecht's exposition.

There are no miracles; awe is just mystery without the ignorance.

Determined faith is wishful thinking; willful credulity is not a virtue.

Immortality is a narcissistic fantasy; consciousness is corporeal.

Faith is authoritarian; it calls for resignation of the will.

Divine intervention is a nepotism fantasy; there is no ultimate meaning or plan.

Compassion is a human quality; faith calls for acquiescence to an arbitrary moral code.

Faith is coercive; orthodoxy is repression of thought.


The above summary provides a glimpse of the encyclopedic knowledge found in Doubt. Hecht's analysis is as compelling as her exposition is thorough. The book is quite long (551 pages) and comprehensive, but anything but dry. It is a fascinating history of doubt across the ages, continents and traditions.

Doubt is entertaining for the casual reader and indispensable for the scholar. Readers will take away a historical perspective that will leave them skeptical of hype over "innovations" like the New Atheism and Atheism Plus. After the first time through, you will find Doubt a handy reference. I can't recommend it highly enough.