I wouldn't presume to be equal to the task of paying an adequate tribute to Christopher Hitchens, but the HRI Book Club adopted Mortality as its selection for November and I will give it my best. The book is as much about Hitchens' as it is on the subject of mortality as the two converged as the author faced the end. Hitch would have abhorred a maudlin display or hero worship, but who can deny his impact?


Read more »
Posted by Tony Houston at 10:24 AM No comments: Links to this post 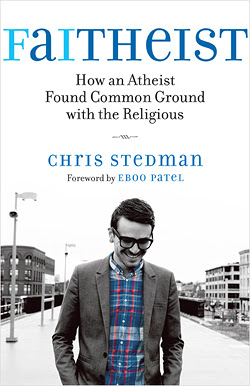 The Humanist Book Club adopted Faitheist: How an Atheist Found Common Ground with the Religious for its December discussion in preparation for an author visit to Bryant University, co-sponsored by the Humanists of Rhode Island. I found the book alternately challenging and exasperating, but its limitations are mitigated by the youth and inexperience of the author and chronological development of the memoir. Most often, the questions he raises in one part of the book, he resolves elsewhere. The logical inconsistencies are suggestive of a young author who has yet to resolve every nuance of the issues that preoccupy him. Who has?
Read more »
Posted by Tony Houston at 2:33 PM 1 comment: Links to this post The Humanist Book Club selection for September was Doubt: A History: The Great Doubters and Their Legacy of Innovation from Socrates and Jesus to Thomas Jefferson and Emily Dickinson by Jennifer Hecht. To say that the author's depth and breadth of knowledge is impressive is an understatement.

The main thesis seems to be that the nature of doubt reflects the nature of belief and vice versa. According to Hecht, compulsory faith was not a part of religion until the emergence of skepticism and secularism. Belief yields to rationalism when doubters crave knowledge. When cosmopolitan life exposes believers to rival faiths, orthodoxy yields to tolerance but leaves doubters craving meaning. On Sunday afternoon, December 16, Steve Ahlquist and I participated in the 25th annual Amnesty International Write-a-thon for Human Rights hosted by the First Unitarian Church of Providence. The event was held from 1:00-5:00. Folders were provided containing profiles, letter templates and blank paper for handwritten notes.

Volunteers wrote letters of solidarity to prisoners of conscience and to authorities appealing for the release of these prisoners. Other letters called for the investigation of harassment, intimidation, imprisonment, torture, rape, disappearance and murder of human rights activists.

Letters calling for the investigation of crimes against activists were sent on behalf of Women's Link Worldwide (WLW) Program Director MĂłnica Roa (Colombia), The Committee of Relatives of the Detained and Disappeared in Honduras (COFADEH), Sudanese activist youth group Girifna ("We're fed up") and LGBTI activist Noxolo Nogwaza (South Africa).

Letters of solidarity--but not to authorities--were requested for Missouri inmate Reggie Clemons in a case of prosecutorial misconduct.

There was a tremendous sense of community among the Unitarians and their guests, and some momentary fanfare over the arrival of Congressman David Cicilline and Senator Jack Reed. The predominant mood was a sense of commitment to positive action. I encourage anyone who can to participate in such events in the future whenever possible.
Posted by Tony Houston at 11:14 AM No comments: Links to this post

Letter to the Newport Daily News Posted by Steve Ahlquist at 11:25 PM No comments: Links to this post Posted by Steve Ahlquist at 6:55 PM No comments: Links to this post


One World.
One Hope.
And this is Enough.
Humanism.