Today the Rhode Island Humanist Book Club placed a banner in the Rhode Island State House celebrating Rhode Island’s founder Roger Williams. The banner is a reminder that the state’s founder—although religious—was a champion of secular government. Williams disapproved of ostentatious displays of piety such as those on display at the State House.

The Humanist banner depicts Williams meeting with the Naragansetts and features a representative quote by Williams that demonstrates his defense of "soul libertie" and opposition to the "monstrous partiality" of sectarian dogma. Humanism is a progressive philosophy of life that, without theism and other supernatural beliefs, affirms our ability and responsibility to lead ethical lives of personal fulfillment that aspire to the greater good of humanity. Humanists of Rhode Island are dedicated to good works and service projects that will best demonstrate our ideals.

Posted by Tony Houston at 10:05 AM No comments: Links to this post

Today the Secular Coalition for Rhode Island (SCRI) placed a banner in the Rhode Island State House celebrating Rhode Island’s founder Roger Williams. The banner is a reminder that the state’s founder—while religious himself—was a champion of secular government who disapproved of public displays of piety. Posted by Tony Houston at 5:30 PM No comments: Links to this post

Posted by Steve Ahlquist at 7:24 PM No comments: Links to this post 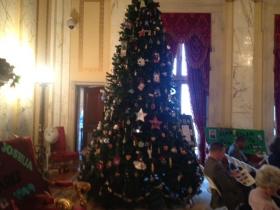 Secular Decoration Adorns Statehouse Alongside Christmas Tree
Posted by Steve Ahlquist at 12:31 PM No comments: Links to this post

Discussing the Roger Williams Banner on WADK 1430am with Bruce newberry

Posted by Steve Ahlquist at 12:08 PM No comments: Links to this post

Posted by Steve Ahlquist at 8:59 AM No comments: Links to this post

Please feel free to use these photos in your coverage of the Humanist Banner at the RI State House. 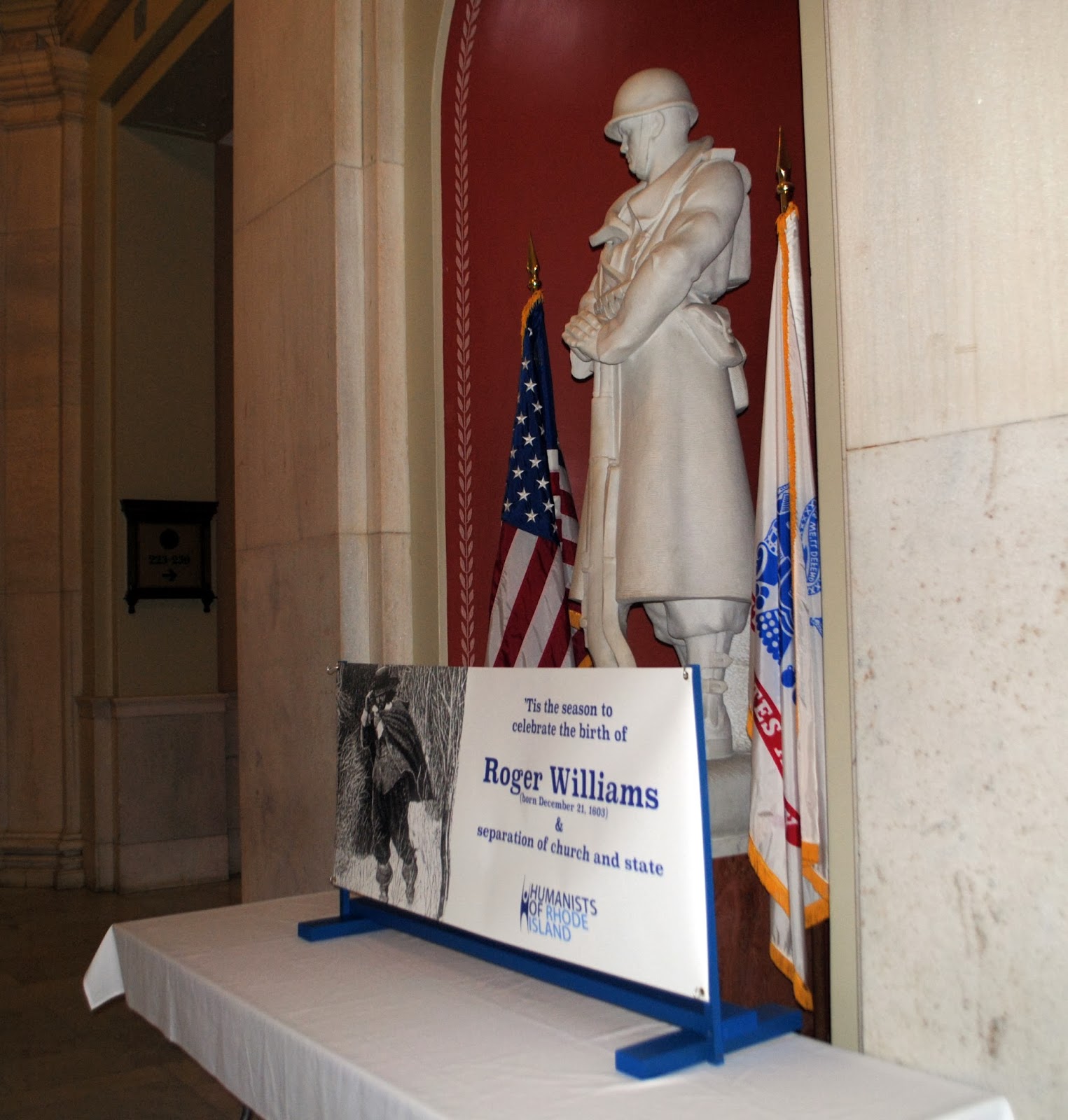 Posted by Steve Ahlquist at 6:50 PM No comments: Links to this post

From the Providence Journal:

PROVIDENCE, R.I. (AP) -- A group of secularists has placed a "seasonal banner" in the State House to celebrate the 410th birthday of Rhode Island founder Roger Williams.

The Humanists of Rhode Island erected the 2-foot by 5-foot banner on the State House's second floor on Monday. It's intended to be a reminder of the separation of church and state and Rhode Island's founding as a place of religious freedom.

The humanists also say the banner is a "counterpoint" to the Christmas trees and Jewish menorah now on display at the Statehouse.

The group's president, Steve Ahlquist, says Williams would be "appalled" by recent controversy over the State House Christmas tree.

Governor Chafee's decision to call the tree a holiday tree in past years prompted angry protests. Chafee backtracked this year.

As usual at the ProJo, the comments are extra-special.

Posted by Steve Ahlquist at 6:33 PM No comments: Links to this post

Yesterday the Humanists of Rhode Island (HRI) placed a 2’x5’ banner on the second floor of the RI State House celebrating the birth of Rhode Island’s founder Roger Williams and the separation of church and state. The banner is intended to be a counterpoint to the various and sundry religious displays now scattered throughout the State House, and to serve as a reminder that the government of the United States, and in particular the state of Rhode Island, is secular by nature and design.

“Roger Williams was a radical in his time, and a visionary,” says Steve Ahlquist, president of HRI, “He would have been appalled by the faux controversy being generated around the Christmas Tree/Holiday Tree debate and against any kind of holiday inspired religious displays currently on display in the State House. Rhode Island boasts the first government formed, anywhere in the world, that specifically protected freedom of religion and freedom of conscience. We should be proud of our heritage.”
Posted by Steve Ahlquist at 8:52 AM 2 comments: Links to this post

At 4pm on December 21, 2012, Kara Russo and Chris Young led a group of about twenty-five people into the Rhode Island State House and erected a small nativity scene at the base of the “Holiday Tree” not too far from the large Hanukah menorah. According to reports the group sang Christmas songs, engaged in prayer, and erected a seasonal holiday display that was to last until January 6, but was apparently taken down just after Christmas along with all the rest of the Christmas decorations on display.

The Youngs were advised in their efforts by the Thomas More Society, whose president, Thomas Brejcha, said, “So long as these Christmas religious displays and ceremonies are privately sponsored, funded, and held in traditional public forums, they are constitutionally protected.”

Recently I became aware that the erection of a nativity scene at Rhode Island’s State House was the second in an organized, national effort to put up such displays in or near every state capitol in the country. According to the website, “for the past five years, a very special Nativity Scene has gone up in a prominent spot in the Rotunda of the State Capitol Building in Springfield, Illinois,” based on the Federal Court decision Grutzmacher v The Chicago Building Commission.

Rhode island joined the party in 2012 with their own Nativity Scene at their state capitol. Mississippi also has a Nativity Scene which makes it the third capitol to feature the real meaning as to why we celebrate Christmas. All of these are the result of a small but determined group of people who wanted to honor the Holy Family enough to get involved, and get the job done."

In Rhode Island, Governor Chafee gave up trying to call the large evergreen in the Rhode Island State House rotunda a “Holiday Tree” and decided to officially refer to it as a “Christmas Tree.” I wrote at the time that the Humanists of Rhode Island were disappointed with the governor’s decision, but the group would instead focus on our seasonal blood drive, and of course we are continuing that important work and urge everyone to join us, whether you identify with our secular values or not.

However, in light of the fact that there seems to be a national effort under way to invade every state capital with permanent displays of religious imagery, (as can be seen in this recent piece about Florida’s capital) the Humanists of Rhode Island have no choice but to respond in kind.

Today we have sent an email to those in charge of public displays at the State House declaring our intent to prominently display a secular humanist seasonal banner in the main rotunda of the state house, celebrating secular values and separation of church and state. You can see the art for the banner at the top of this post.

As we await a timely reply from the powers-that-be in the State House, people should know that this was not a decision our group came to easily, as we would much rather focus on our community service efforts, but we are a group that firmly believes, as John F. Kennedy once declared, “in an America where the separation of church and state is absolute.” This is why our banner honors the founder of our state, Roger Williams, and attempts to claim the season as a celebration of his wildly progressive and radical ideas.
Posted by Steve Ahlquist at 8:20 AM No comments: Links to this post