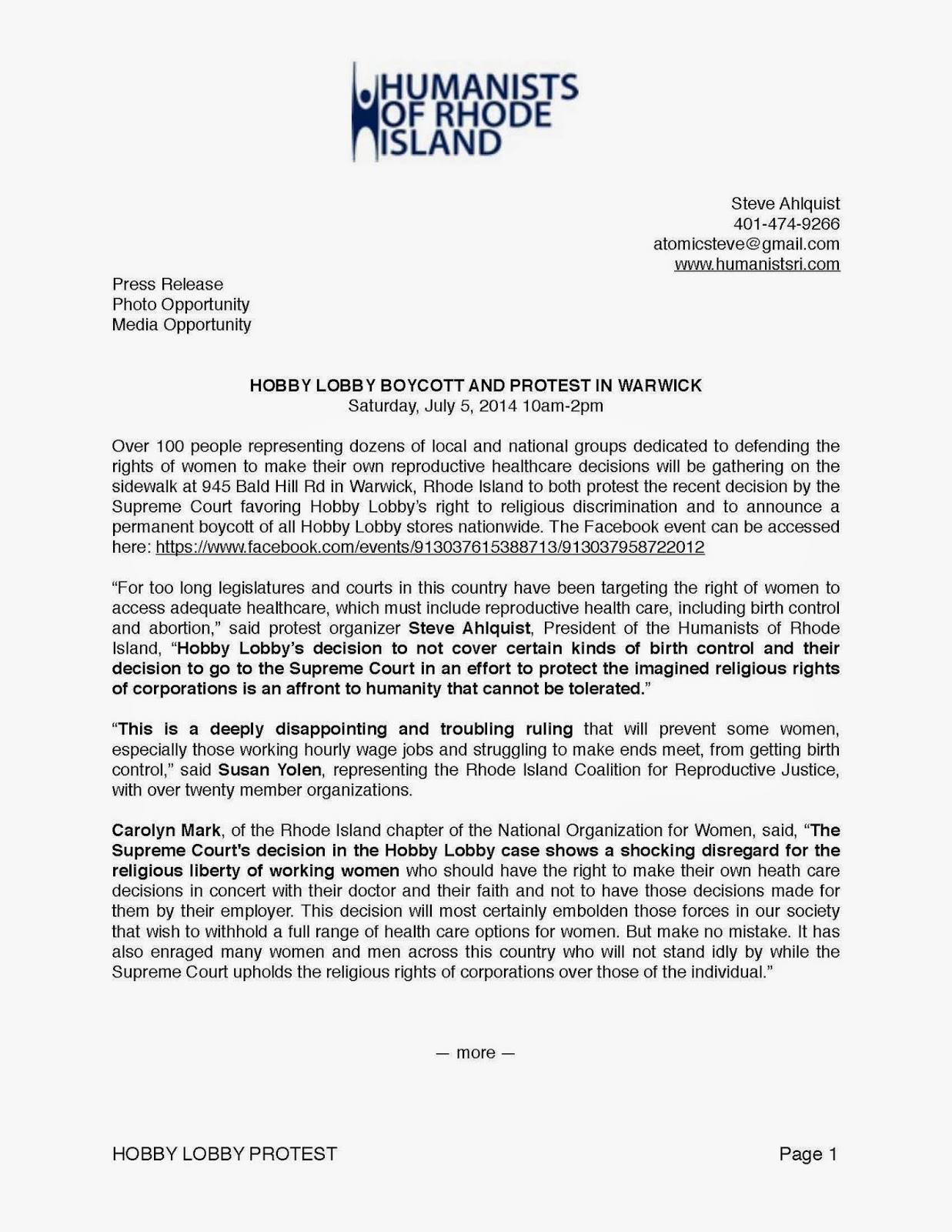 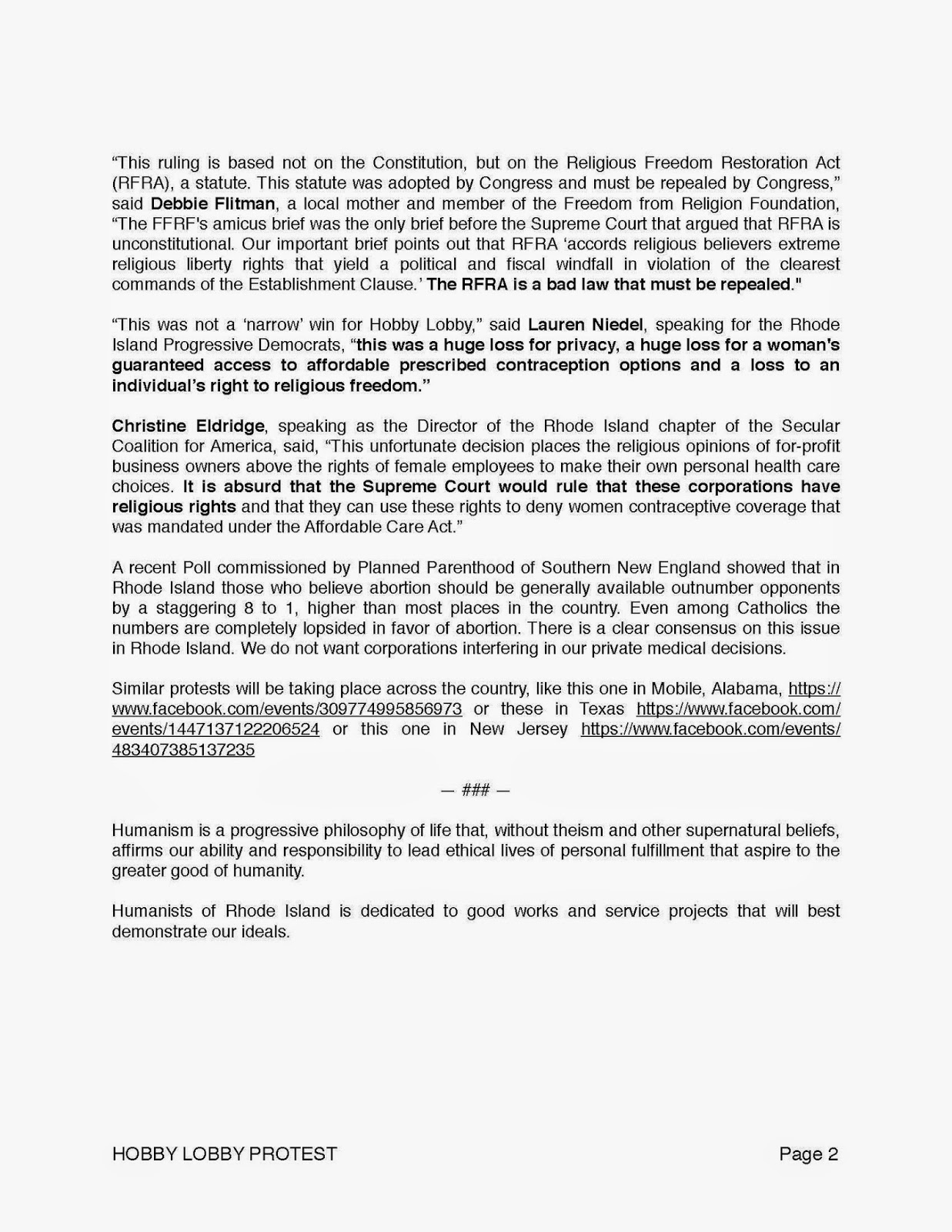 
Over 100 people representing dozens of local and national groups dedicated to defending the rights of women to make their own reproductive healthcare decisions will be gathering on the sidewalk at 945 Bald Hill Rd in Warwick, Rhode Island to both protest the recent decision by the Supreme Court favoring Hobby Lobby’s right to religious discrimination and to announce a permanent boycott of all Hobby Lobby stores nationwide. The Facebook event can be accessed here.

“For too long legislatures and courts in this country have been targeting the right of women to access adequate healthcare, which must include reproductive health care, including birth control and abortion,” said protest organizer Steve Ahlquist, President of the Humanists of Rhode Island, “Hobby Lobby’s decision to not cover certain kinds of birth control and their decision to go to the Supreme Court in an effort to protect the imagined religious rights of corporations is an affront to humanity that cannot be tolerated.”

“This is a deeply disappointing and troubling ruling that will prevent some women, especially those working hourly wage jobs and struggling to make ends meet, from getting birth control,” said Susan Yolen, representing the Rhode Island Coalition for Reproductive Justice, with over twenty member organizations.

Carolyn Mark, of the Rhode Island chapter of the National Organization for Women, said, “The Supreme Court's decision in the Hobby Lobby case shows a shocking disregard for the religious liberty of working women who should have the right to make their own heath care decisions in concert with their doctor and their faith and not to have those decisions made for them by their employer. This decision will most certainly embolden those forces in our society that wish to withhold a full range of health care options for women. But make no mistake. It has also enraged many women and men across this country who will not stand idly by while the Supreme Court upholds the religious rights of corporations over those of the individual.”

“This ruling is based not on the Constitution, but on the Religious Freedom Restoration Act (RFRA), a statute. This statute was adopted by Congress and must be repealed by Congress,” said Debbie Flitman, a local mother and member of the Freedom from Religion Foundation, “The FFRF's amicus brief was the only brief before the Supreme Court that argued that RFRA is unconstitutional. Our important brief points out that RFRA ‘accords religious believers extreme religious liberty rights that yield a political and fiscal windfall in violation of the clearest commands of the Establishment Clause.’ The RFRA is a bad law that must be repealed."

“This was not a ‘narrow’ win for Hobby Lobby,” said Lauren Niedel, speaking for the Rhode Island Progressive Democrats, “this was a huge loss for privacy, a huge loss for a woman's guaranteed access to affordable prescribed contraception options and a loss to an individual’s right to religious freedom.”

Christine Eldridge, speaking as the Director of the Rhode Island chapter of the Secular Coalition for America, said, “This unfortunate decision places the religious opinions of for-profit business owners above the rights of female employees to make their own personal health care choices. It is absurd that the Supreme Court would rule that these corporations have religious rights and that they can use these rights to deny women contraceptive coverage that was mandated under the Affordable Care Act.”

A recent Poll commissioned by Planned Parenthood of Southern New England showed that in Rhode Island those who believe abortion should be generally available outnumber opponents by a staggering 8 to 1, higher than most places in the country. Even among Catholics the numbers are completely lopsided in favor of abortion. There is a clear consensus on this issue in Rhode Island. We do not want corporations interfering in our private medical decisions.

Similar protests will be taking place across the country, like this one in Mobile, Alabama, or these in Texas or this one in New Jersey.

Humanism is a progressive philosophy of life that, without theism and other supernatural beliefs, affirms our ability and responsibility to lead ethical lives of personal fulfillment that aspire to the greater good of humanity.

Humanists of Rhode Island is dedicated to good works and service projects that will best demonstrate our ideals.
Posted by Steve Ahlquist at 12:36 PM