We often find human beings setting aside their personal interests, their health, their chances to have children, and devoting their entire lives to furthering the interests of an idea that has lodged in their brains. (p. 3)

Like religions, parasites care nothing for the well being of their hosts. Dennett observes that lancet flukes have learned to manipulate their hosts in order to propagate. The comparison, while provocative, aptly illustrates the perils of the naturalistic fallacy so often invoked by religious apologists.


The comparison of the Word of God to a lancet fluke is unsettling, but the idea of comparing an idea to a living thing is not new. (p. 5) 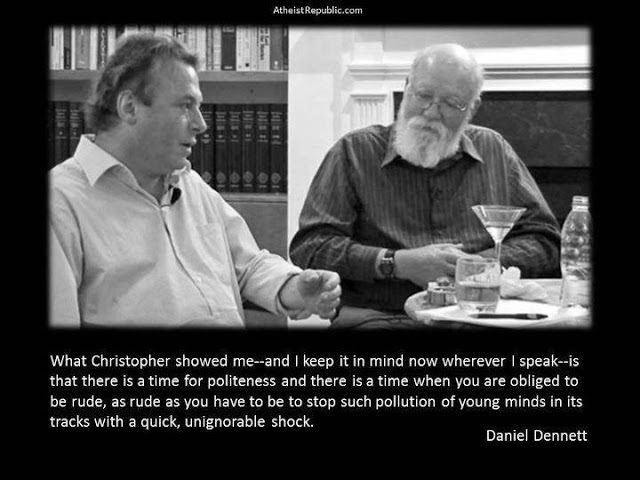 Early on, Dennett describes the essential characteristics of religion.


The core phenomenon of religion, I am proposing, invokes gods who are effective agents in real time, who play a central role in the way the participants think about what they ought to do. (p. 11)

Dennett appeals to compassion for believers, comparing them to addicts in need of help.


Religious cults and political fanatics are not the only casters of spells today. Think of the people who are addicted to drugs, or gambling, or alcohol, or child pornography. They need all the help they can get and I doubt if anybody is inclined to throw a protective mantle around these entranced ones and admonish, "Shhhh! Don't break the spell." (p. 13)

He makes believers an offer they can't refuse. If they are so certain that they have unassailable truth on their side, then they have no reason to shield their faith from scrutiny.


Those who are religious and believe religion to be the best hope of humankind cannot reasonably expect those of us who are skeptical to refrain from expressing our doubts if they themselves are unwilling to put their convictions under the microscope. (p. 17) 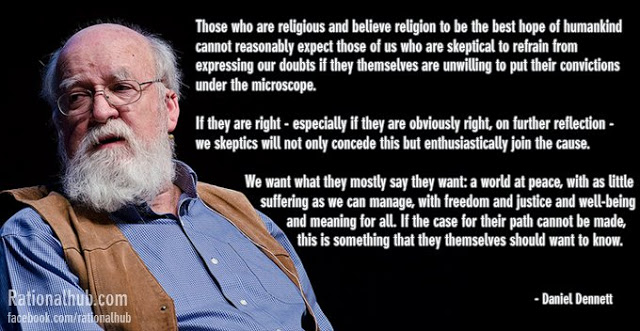 The spell that Dennett proposes to break is not the spell of religion itself, but the taboo against criticism of religion. He acknowledges, however, that breaking this spell leaves religion vulnerable to losing its influence. This is what non-believers know and believers are afraid to admit. Checkmate.

In light of two millenia already devoted to the topic, Dennett sets aside the question of God's existence in favor of an establishing the human origins of religion.


I decided some time ago that diminishing returns had set in on the arguments about God's existence, and I doubt that any breakthroughs are in the offing, from either side. (p. 27)

Dennett offers a concrete justification for his endeavor that does not rely on analogies to parasites or addiction.


I, for one, fear that if we don't subject religion to such scrutiny now, and work out together whatever revisions and reforms are called for, we will pass on a legacy of ever more toxic forms of religion to our descendants. (p. 39)

He softens the justification with a more favorable comparison of religion to music.


I recognize that many people feel about religion the way I feel about music. They may be right. Let's find out. That is, let's subject religion to the same sort of inquiry that we have done with tobacco and alcohol and, for that matter, music. (p. 42)

To discredit the old adage that too much knowledge can be a dangerous thing, Dennett argues that ignorance is not bliss.


In spite of all the warnings over the centuries, I have been unable to come up with a case of some valuable phenomenon that has actually been destroyed, or even seriously damaged, by scientific inquiry. (p. 45)

On the topic of ignorance, Dennett blames religion for the alarming fact that only about a quarter of the population of the United States understands evolution as scientifically uncontroversial.


They have been carefully and patiently rebutted by conscientious scientists who have taken the trouble to penetrate their smoke screens of propaganda and expose their shoddy arguments and their apparently deliberate misrepresentations and evasions. (p. 61) 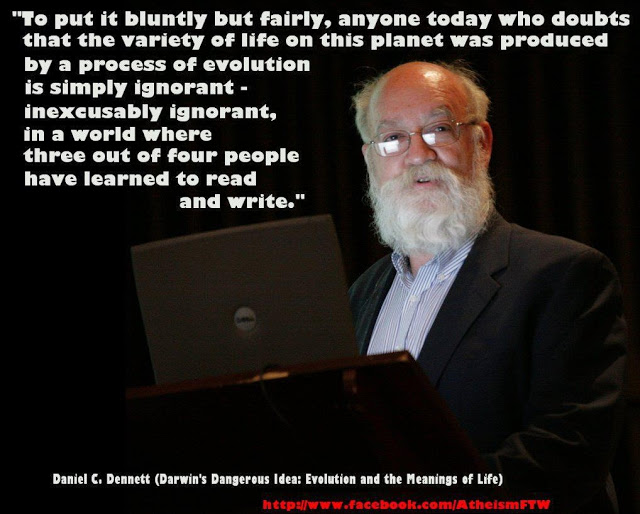 Dennett turns to evolution to address the argument that if religion was once adaptive it must, therefore,  always remain so.


Every bargain in nature has its rationale, free-floating unless it happens to be designed by human bargainers, the only rationale-representers yet to have evolved on the planet. But a rationale can become obsolete. (p. 63)

He then speaks to the need to investigate the evolutionary costs and benefits of religion.


Whatever else religion is as a human phenomenon, it is a hugely costly endeavor, and evolutionary biology shows that nothing so costly just happens. (p. 69)

I had already been convinced by other authors that religion was deserving of rigorous scrutiny. Dennett's unique contribution is to suggest research agendas for various areas of inquiry.


What constitutes the heath and pathology of religious phenomena? These questions can be addressed by anthropology, sociology, psychology, psychology, history, and any other variety of cultural studies that you like, but it is simply inexcusable for researchers in these fields to let disciplinary jealousy or fear of "scientific imperialism" create an ideological iron curtain that could conceal important underlying constraints and opportunities from them. (p. 72) 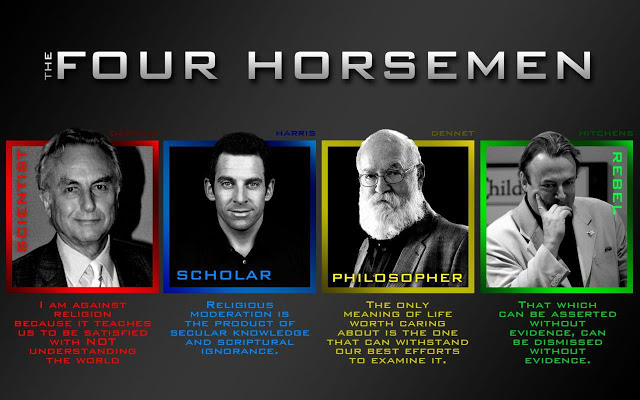 Dennett advances the hypothesis of Hyperactive Agency Detection as an explanation for why religion is ubiquitous and might have been adaptive.


The memorable nymphs and fairies and goblins and demons that crowd the mythologies of every people are the imaginative offspring of a hyperactive habit of finding agency whenever anything puzzles or frightens us. (p. 123)

Given that an adaptive feature can become obsolete, Dennett turns from the origins of religion to its perseverance.


When curiosity stubs its toe on an unexpected event, something has to give: "what everybody knows" has a counterexample, and either the doubt blossoms into a discovery, which leads to the abandonment or extinction of a dubious bit of local lore, or the dubious item secures itself with an ad hoc repair of one sort or another, or it allies itself with the other items that have in one way or another put themselves out of the reach of gnawing skepticism. (p. 163) 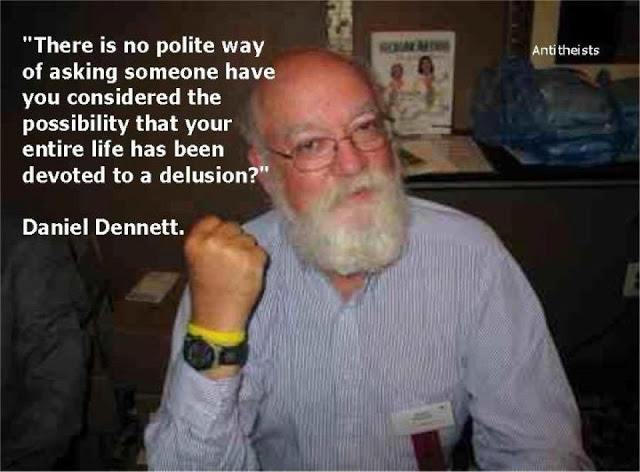 The discussion of religious tenacity turns to the need to inculcate cooperation among genetically diverse people in inequitable societies. The cost of this internal solidarity is xenophobia. Of course, the longevity of religion cannot be fully understood without the inevitable discussion of obscurantism.


The fog of mystery has descended conveniently over all the anthropomorphic features that have not been abandoned outright. (p. 206)

Besides social pressure and obscurantism, reverence for tradition keeps some non-believers from abandoning their religious affiliations.


Recognizing that the very idea of commanding someone to believe something is incoherent on its face, an invitation to insincerity or self-deception, many Jewish congregations reject the demand for orthodoxy, right belief, and settle for orthopraxy, right behavior. (p. 223)

On the other hand, some believers take so much pride in the strength of their faith that they are willing to embrace the most outrageous claims.


For a truly awesome and mind-teasing proposition, there is nothing that beats a paradox eagerly avowed. (p. 229)

Any discussion of the religious perseverance must naturally include belief in belief.


The very widespread (but far from universal) opinion is that religion is the bulwark of morality and meaning. Without religion we would fall into anarchy and chaos, in a world in which "anything goes." (p. 245) 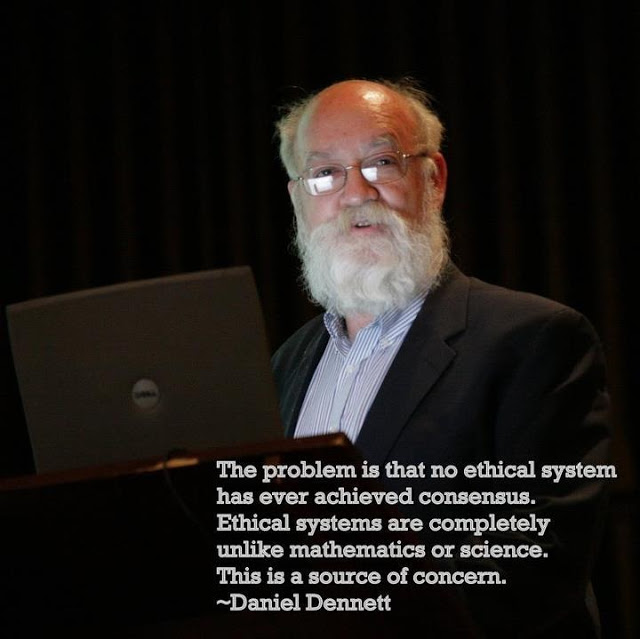 Defense of religion sometimes comes from surprising quarters. Even non-believing scholars can be conscripted.


In fact, one of the few serious differences between the natural sciences and the humanities is that all too many thinkers in the humanities have decided that the postmodernists are right: it's all just stories, and all truth is relative. (p. 262)

The problem with postmodern relativism is that is doesn't admit to progress that results when reasonable scrutiny is applied to truth claims.


This is my reason for wanting people to understand and accept evolutionary theory. I believe that their salvation may depend on it! How so? By opening their eyes to pandemics, degradation of the environment, and loss of biodiversity, and by informing them about some of the foibles of human nature. (p. 268) 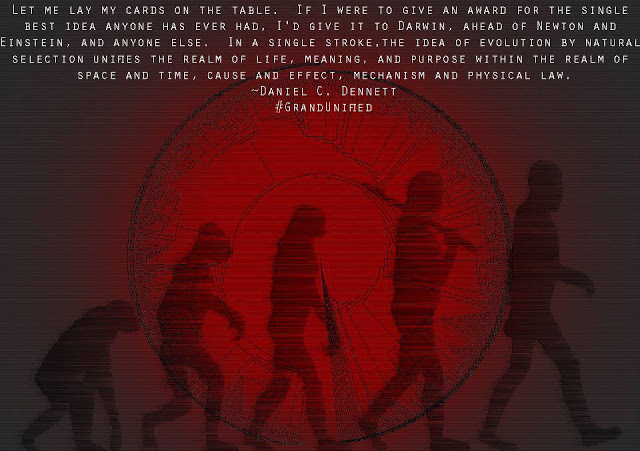 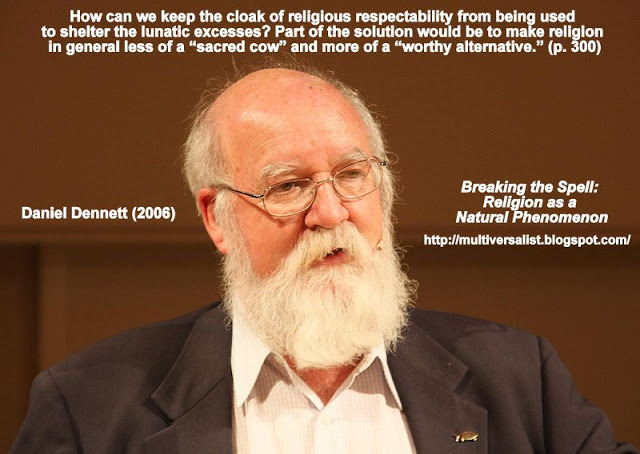 Dennett's point about religion being a "worthy alternative" rather than a "sacred cow" (p. 300) was the idea that most resonated with me from this book. As a humanist concerned with social and economic justice, I am open to alliances with interfaith groups, but not to extolling faith as a virtue. Atheists engaged in interfaith activism will have to confront this dilemma. The problem is that the word "interfaith" communicates a faith-in-faith message and a gratuitous marginalization of atheists.

Dennett is perhaps the most persuasive of the Four Horsemen because he is not easily dismissed on the grounds of stridency. Dennett carefully avoids straw-man arguments, as a good philosopher should. He even prefaces his more pointed indictments of religion with a preemptive apology of sorts. These passages read like a friend about to tell you an uncomfortable truth about yourself. Breaking the Spell is well worth a read.